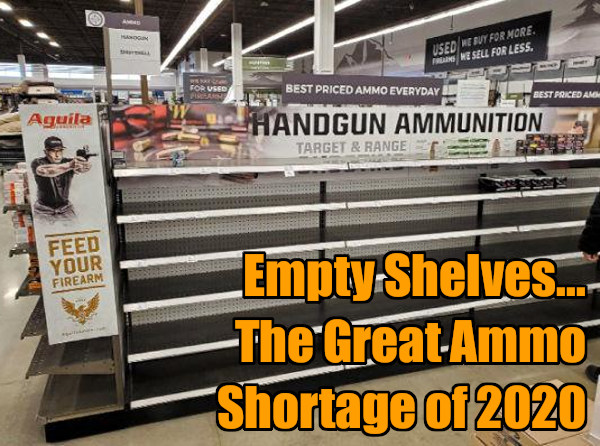 The ammo and primer shortage is real, and it’s here to stay — well into 2021. That’s what industry experts tell us: “With [ammunition] demand far outstripping supply and inventory levels in the channel at all-time lows, we see strong demand continuing[.]” — Christopher Metz, CEO of Vista Outdoor

Certain types of ammunition, 9mm Luger for example, are very difficult to find these days. And what IS available is often marked up 300-400% over 2019 prices. Demand has far exceeded supply. And the ammo shortage won’t end any time soon. Vista Outdoor’s CEO Metz added: “Despite us producing flat-out for six months, there is no buildup of inventory at any of our customers. In fact, every one of them would like significantly more. Simply put, consumer demand continues to outpace our ability to supply.”

Ammunition Shortage Impacts Primer Supply
Rifle and pistol primers are nearly sold out everywhere, with some less-than-reputable vendors now charging 4-5 times the normal price. So what’s going on here — why can’t you find primers? One reason is that primer producers such as Federal and CCI are using the vast majority of the primers they make to complete their loaded ammunition, which is flying off the shelves.

What is causing the ammo panic buying and primer shortage?
There are a number of key reasons:

1. Concerns over the recent election and potential Democratic Party control of U.S. House of Representatives, U.S. Senate, and the White House;
2. General worry and paranoia caused by the COVID-19 pandemic;
3. Fear of new legislation banning guns and restricting ammunition purchases;
4. Social unrest and rioting led by BLM and left-wing activists and tolerated/encouraged by Blue State government officials; and perhaps most importantly,
5. The vast increase in the number of new gun buyers.

Huge Increase in Gun Purchasing in 2020
2020 will probably set an all-time record for gun purchasing in the USA. This spike in gun buying has been propelled by the greatest annual increase in gun ownership in U.S. history. According to data from the NSSF, roughly 6.2 million Americans purchased their first firearm in 2020. A NSSF dealer survey estimates that 40% of all gun sales were conducted to purchasers who have never previously owned a firearm. And women accounted for 40.2% of first-time gun purchases. We’ve never seen that kind of spike in gun ownership in a single year. This is unprecedented.

Ammo Shortage Will Continue for Many Months, Well into 2021
What are the prospects for greater availabilty of loaded ammo in the months ahead? Not so good according to Vista Outdoor CEO Christopher Metz whose company operates Federal, CCI, RCBS, Alliant, Blazer and many other shooting industry brands. Metz declared: “We currently have over a year’s worth of orders for ammunition.” That value of those back-orders exceeds ONE BILLION dollars. “This is unprecedented for our company. With demand far outstripping supply and inventory levels in the channel at all-time lows, we see strong demand continuing[.]”

There is some good news however — the former Remington ammo factory will start cranking out ammunition again. The American Rifleman reports: “Vista Outdoor has purchased the [Remington Outdoor] ammunition factory in Lonoke, Arkansas [and will resume] production at or near full capacity. The Northwest Arkansas Democrat Gazette reports 300 employees furloughed by the former owner of the plant will soon be recalled to join nearly 400 still working at the facility.”

From the time we began to formally state our operational goals, Customer Satisfaction has always been #1.